Ah, the crisis manager. A hell to design, so that it was automated while having players input meaningful choices. I don't know if I succeeded in fact!

Pocus wrote:Ah, the crisis manager. A hell to design, so that it was automated while having players input meaningful choices. I don't know if I succeeded in fact!

Unfortunately, screenshots of the crisis are only in Russian, and we have not saved that turn. But soon there will be a similar crisis because of Merv, I will save it and send it to you.

It is a pity that most players, even in MP campaigns, avoid crises. This is a great decoration for the game!

And no one knows how crisis cards work ((

Pocus wrote:Ah, the crisis manager. A hell to design, so that it was automated while having players input meaningful choices. I don't know if I succeeded in fact!

You probably already know this, but if you right-click the screenshots and open in a new tab, you'll get a significantly bigger version. 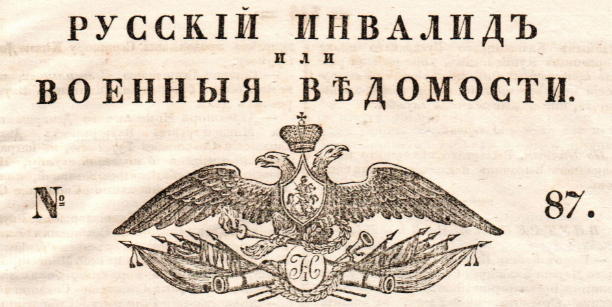 The command of the Russian Turkestan army reports that the detachment of the former Khiva Khan Mukhamad Amin was defeated and destroyed / Now no one there disputes Russian rule . 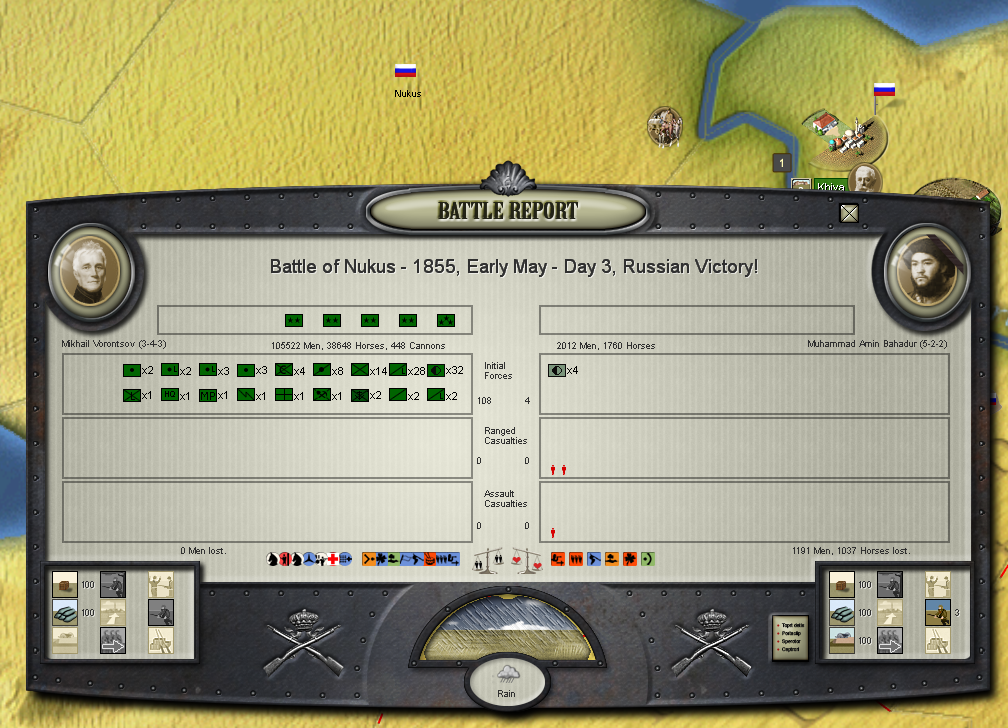 An exotic camel caravan has also become a Russian trophy 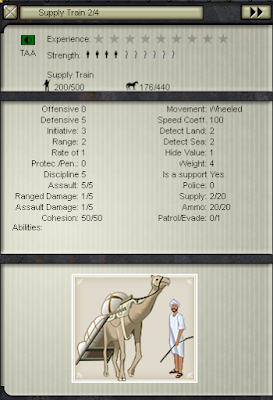 With the death of Muhammad Amin, the armed resistance of the Khivans must completely end, and therefore it has been announced that the Russian army will be significantly reduced in this region and withdrawn to places of permanent deployment. Prince Vorontsov is leaving for the Caucasus and Field Marshal Baryatinsky will become the new commander of the Turkestan Army.

Table of National Morale, Prestige and Military Power of the leading countries of our game for May 1855 (130 turn):

In the summer of 1855, not to say that it would be very unexpected, another uprising of the Caucasus mountaineers broke out, under the leadership of Imam Shamil.

Chechen and Dagestan rebel detachments captured the city of Grozny and the fort of Vladikavkaz. The cavalry detachments of the rebels spread throughout the northern Caucasus. 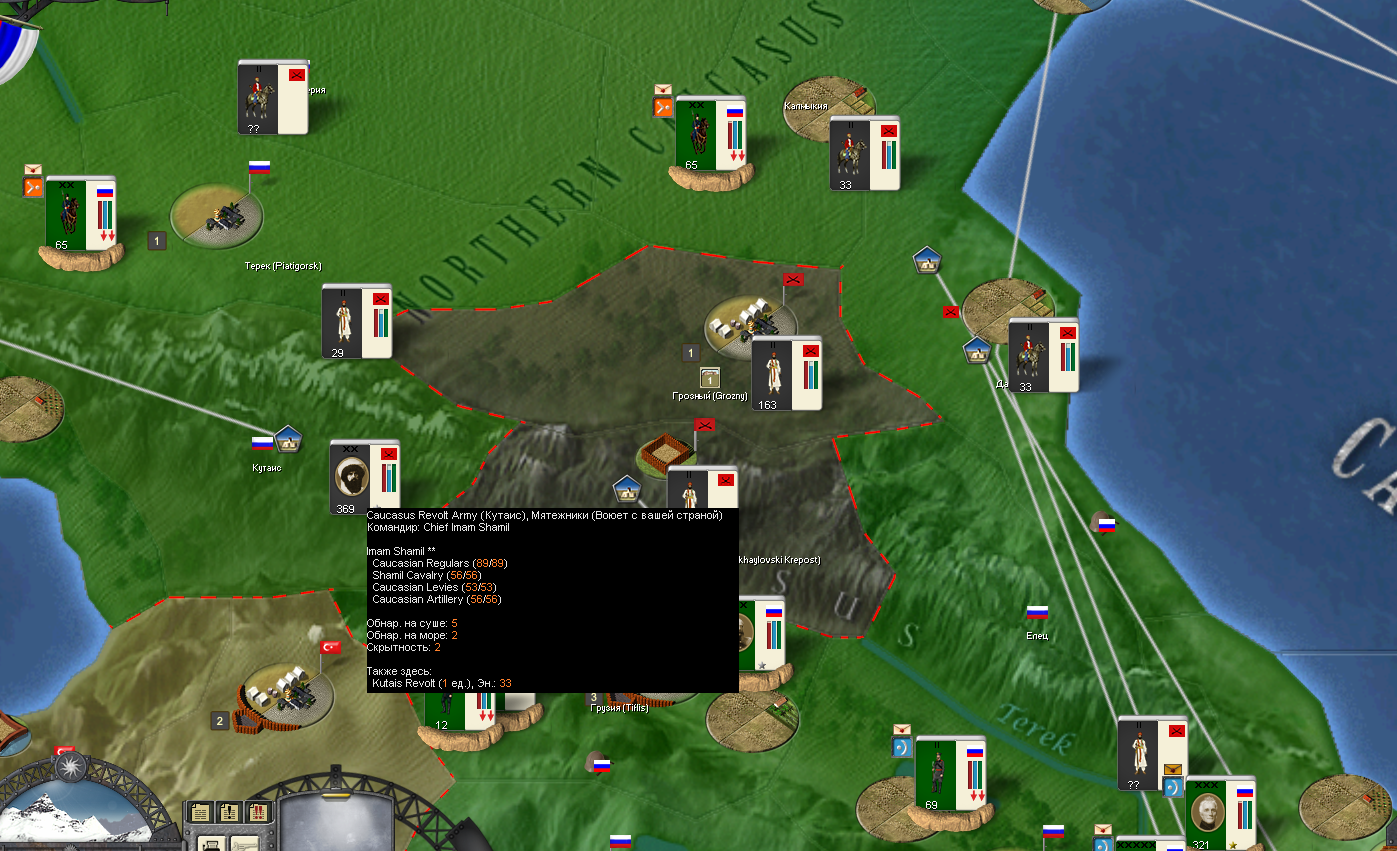 The highly successful campaign against Khiva and the return of the main part of the army to the place of deployment in the Caucasus made it possible to immediately start suppressing the revolt.In connection with the aggravation of the situation in the Caucasus, the young emperor Alexander Nikolaevich ordered to postpone the coronation events to a later date. 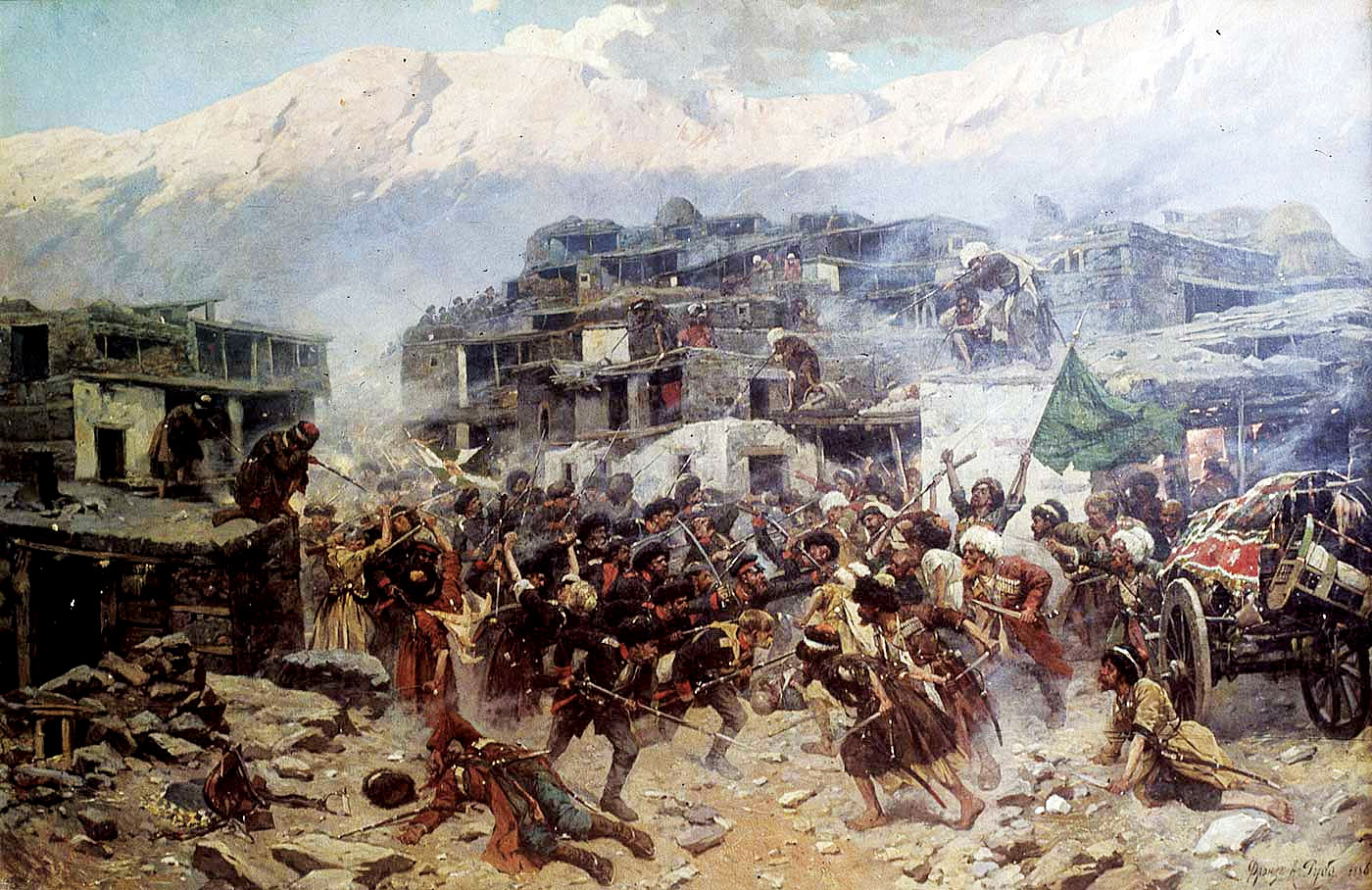 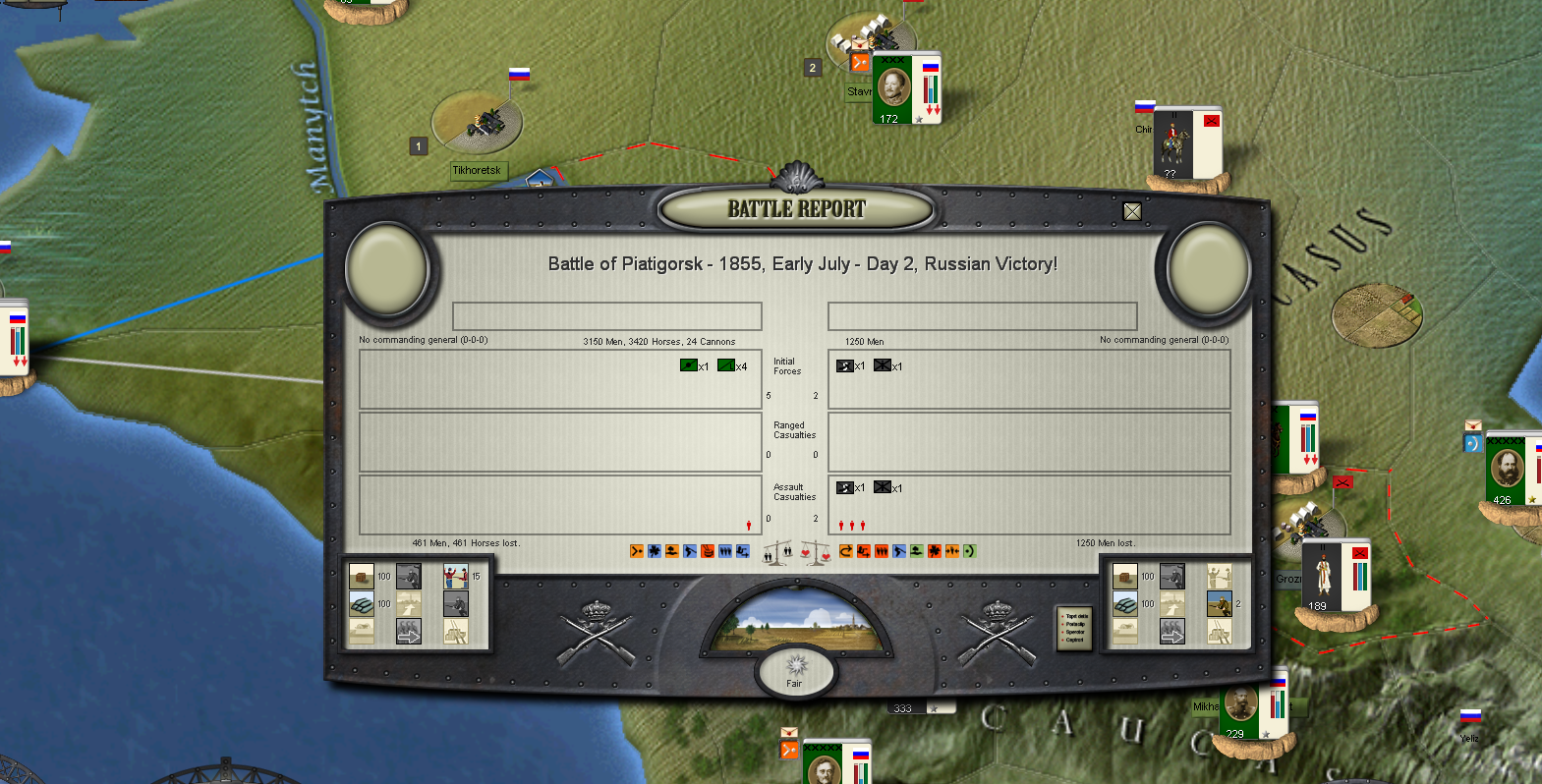 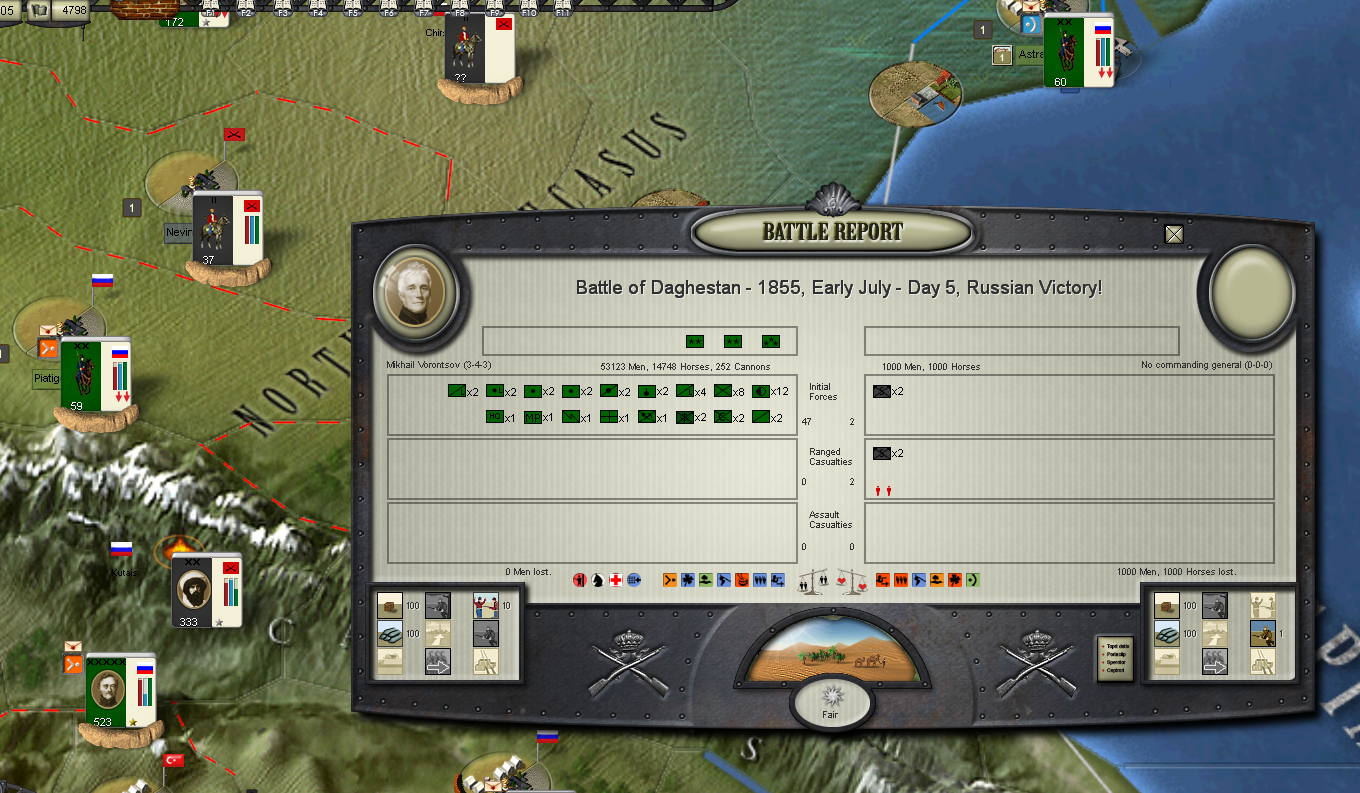 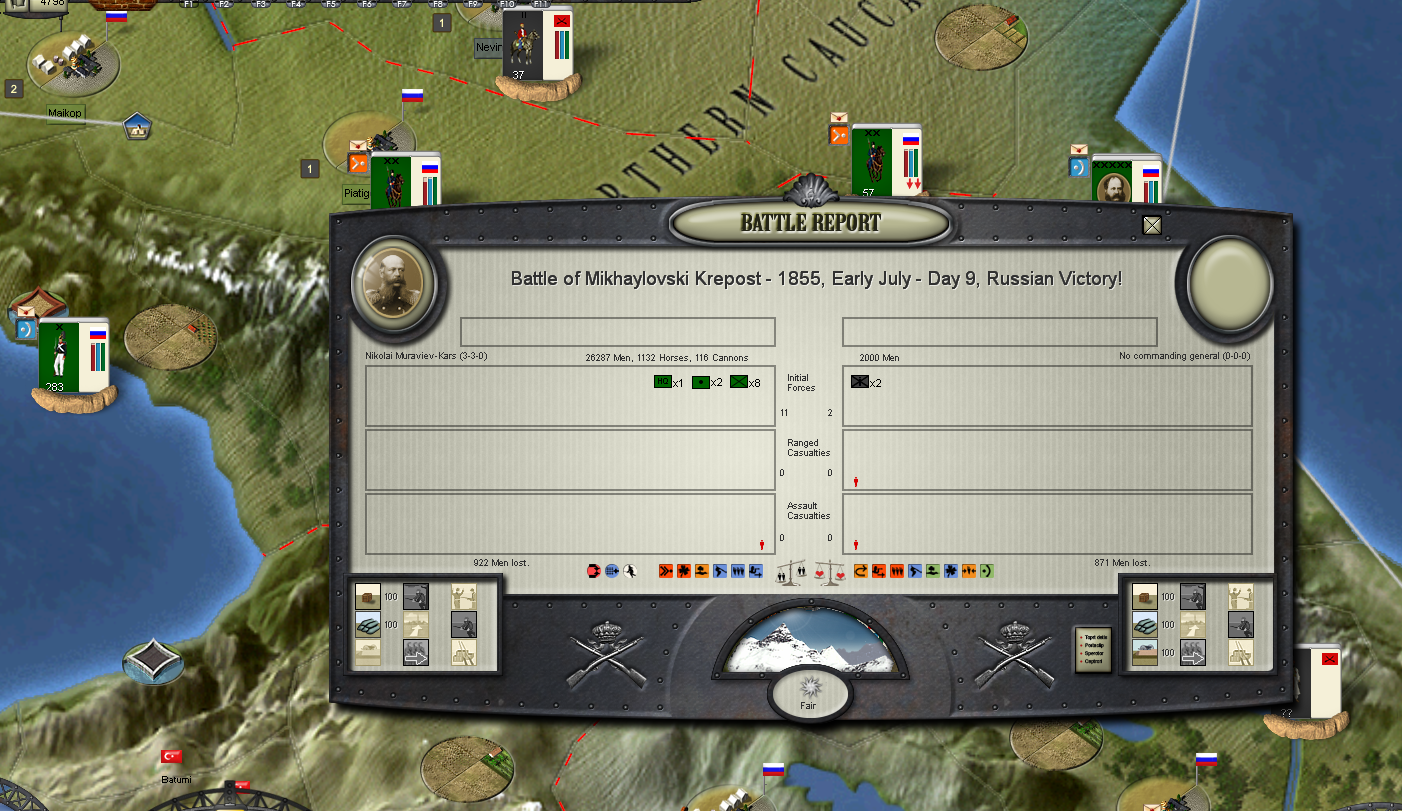 I'd very much like to participate in your PBEM, if I'm too late for this one I would be happy to sign up for the next.

Any country is fine for me. I made a friend request for you in Steam, user name Eyes on Stalks

HootsMaguire wrote:I made a friend request for you in Steam, user name Eyes on Stalks
Contact me if it's ok to join in!

Ok, added you as a friend of Steam

HootsMaguire wrote:I'd very much like to participate in your PBEM, if I'm too late for this one I would be happy to sign up for the next.
Any country is fine for me.

Of course, we invite all newcomers to our company. As long as there are vacant countries in the PON game, you can join us.
But you understand that all large and developed countries are already occupied (although we often have losses of players and we can borrow something more important). For example, right now we are activating for a new player of the Orange Republic. A very brave choice! This country can be captured by the British Empire at any time, but the player insisted on playing for it.

Here is the current list of occupied countries and the largest remaining ones:

Many wanted to play for Two Sicilies, but it will be added to Italy by an automatic event. Same as Bavaria to Germany.And we discouraged playing for them. Switzerland is rich and developed, but it is landlocked and there is no chance of expanding it.

HootsMaguire wrote:Hi I guess I'd like to play Republic of New Granada/Colombia - seems perfect for a beginner with not too many complex parts and lots of coffee to drink

Added you to our channel # PON- game-5 in Slask .
I saw that you don't really want to communicate there, but unfortunately the creator of the TWC community decided to use slack for chat, I would love to move the community to Discord.

But now you definitely need to chat with us in slack so that we can add you to the game.

I'm not really against Slack as opposed to Discord, just I see them both as redundant, kind of like drinking Coke and Pepsi at the same time

Anyway I'm in now, Dropbox also and ready to start.

Gents, TWC club has a discord but using slack instead actively..

The addition of a player for the Orange Free State(OFS) (a small Boer republic in South Africa) to our campaign led to a major international crisis.

Even in the process of choosing a new player for his country, the British player announced that OFS and Transvaal would soon be annexed by Britain and there was no point in playing for them. But the newcomer (a brave Pole) insisted, said that he was not afraid of such a prospect!

As a result, during the activation of the OFS, the whole world learned that Britain had declared war on the Transvaal (and why not the OFS?) And declared that in the next 5 turns both Boer republics would be occupied and annexed by the British Empire - since Britain has already been building up its Colonial Presence for 15 turns in the Boer republics and a step away from declaring them their protectorate (or colonies). And the unlucky ruler of the OFS should urgently look for a new country to emigrate.


Russia strongly condemned this aggression and entered into a diplomatic squabble with the British Foreign Office. The Ottoman Empire strongly supported Britain.
Quite unexpectedly, the player for Holland (the history of the homeland of the Boers) offered to transfer the OFS to him for manual management of a short desperate struggle between the Boers and the aggressor.
At the initiative of Russia, an international conference was convened to help the Boers. The representatives of France, the Netherlands, Spain and China agreed to take part in it. Piedmont also leaned towards supporting the Boers (despite alliance with Britain)

But then the United States said that they did not care about the Boers and, in general, they are a loyal ally of Britain and are ready to defend it with weapons in hand from any attacker.
Britain also began to put very heavy pressure on other countries.
After this announcement, all international support for the Boers was immediately blown away, countries began to withdraw their representatives from the international conference.
Post Reply
76 posts

Return to “PBEM and multiplayer matchups (all games)”