it looks like that Devs (through an email from Philippe Thibaut) wants the Region Names to be historically correct. Given the scope and the amount of entries, only a community wide effort could gather the required level of knowledge to get a practical before 2020.

So could you guys please check the region where your native language was spoken in 1914 and post your observations to help improve the game in that regard?

Thanks for any help you could provide.

Will do German names for places in modern day France, Belgium and Luxembourg. Here is just a quick list I did in a quarter of an hour, for more I will have to research (though it's really easy by using Wikipedia, go to the english, french or whatever language site and search for the town, then look for the german language entry, usually you will find the historic German name (occasionally given as alsacian or such). In the worst case one would have to dig through WWII era data (as under occupation a lot of places were renamed using archaic German names)...

P.S.: As a Luxembourger I have a big advantage there as we still call so many places by their old names (Didenuëwen for Thionville/Diddenhofen).

P.P.S.: Would be best to use files here as this topic is very difficult to scroll through with that huge ammount of text.

[The extension txt has been deactivated and can no longer be displayed.]

Being from Austria, will look at the Austrian core provinces and provide the German (Austrian) names of them (and perhaps even the Cities, rivers, mountains etc.)

I would suggest the following, when necessary I tried to find cities that Ageod put on the map.

*the problem with Spandau and Potsdam is that they can nowadays be regarded as parts of Berlin. It may have been different in the 19th century, but from 1900 onwards I think they are too close to Berlin to be considered provincial capitals. Also, Spandau is east, not north of Berlin. Potsdam is south-east, not south, and much closer.
Files: Alternative music for España 1936
Reviews: España 1936 | Civil War 2 | Revolution under Siege | Wars in America | Guide to Beginning WiA

Forezjohn suggested a Google doc so here it is:
https://docs.google.com/spreadsheets/d/1GG_uII_la3baytlAp_P2n1exNh7c_zqNvOg7jF7wiwQ/

is not that i dont like the french names but these city/regions are all Dutch spoken regions so it should be the dutch names like Mechelen.

it is my understanding that devs wants the region names to be historically correct in the displayed languages, eg. English if you pick English in your options, Russian if you pick Russian and so forth. Unfortunately Dutch/Flemish isn't in the options.

And historically speaking, official language in 1914 Belgium was French. Dumb as it was, that's the way it was.

Quoting the found of knowledge Wikipeedia is: "Before the federal structure and the language legislation gradually introduced in the 20th century, French was generally the only language used by public authorities. For example, only since 1967 the Dutch version of the Constitution has equal status to the original French one, and since 1991 the German version is official as well."
http://en.wikipedia.org/wiki/Languages_of_Belgium

PS: your nickname makes me thirsty

About French, it may have been the official language for public authorities but in the whole of Flanders (the majority of the Belgian people), they spoke
Dutch to the local people. Local common people didn't speak French.

That's the way it should be. If the engine can't handle it, otherwise, it could stay in French, even though it's annoying for Dutch speaking people.
Imagine all the Walloon towns in Dutch, it would be weird as well

To be clear, we need the regions to be called as they were called at the time, the language of the game used by the player does not matter AT ALL....so if an English region appears in a French language game, the region STILL is in English for the way its name is displayed on the map (e.g. in French, you'll see London and not [color="#FF0000"]Londres[/color]). May be I was not clear enough...

In other words, you don't care at all of the user's language, you must use the geographic/language relation

For Russian regions, we won't write in Cyrillic, so a 'westernized' version of the name will do

Sorry if I led you to confusion!

Well, sorry to have spread my confusion.

That makes things way easier now, thanks a lot for that clarification Philippe, enlightenment I would even say.

That reduces my list a lot. Only German owend regions of Asace-Lorraine as follows:

Though I believe someone raised the issue of Malmedy. What is that EAW region supposed to represent? The city itself was part of Germany until after WWI. If Malmedy and generally the Sankt Vith district this should be German. If it's supposed to represent east Belgian territory it should be renamed (maybe Spa? or Verviers?).

Caranorn, thanks for your German inputs.

As for Luxembourg, are "Lëtzebuerg" and "Ettelbréck" correct?

As for Malmedy, I renamed it to Verviers. Making it German would make Meuse river the border which is just not accurate.

I also renamed "Ardennes" to "Marche" and Neufchâteau to Arlon.

Bastogne is missplaced and the railroad too but that's another issue.

what do you think about that:


As far as I know there were more Frenchspeaking inhabitants in Brussels but haven't found any firm figure. Would you have one?

A map that could be very useful, Germany ca 1917 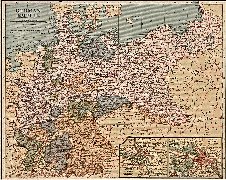 Here is another one for greater Brandenburg ca 1905.

I agree with Marche and Arlon, makes sense.

Luxembourgish was not considered a language at the time (linguistically it really isn't), so I'd go for German language names (Luxemburg and Ettelbruck), alternatively French (Luxembourg, Ettelbruck). But otherwise yes, your spelling is correct.

Speaking of railroads, the railroad from Luxembourg to Liège and Sankt Vith (the first German troops to enter Luxembourg in 1914 came that way (and left soon after as they were a day ahead of schedule (bad if you wish to pretend the french already violated neutrality) )) is missing. That line would run from Luxembourg through Ettelbruck, through Eifel to Aachen, also from Ettelbruck via Verviers to Liège. Probably also directly from Eifel to Verviers. The first part of that line was not rebuilt after destructions of WWII, the second is still in use today both parts date back to the 19th century. These lines were used by the Germans during WWI and even expanded.

Which reminds me, I'd rename Eifel to Sankt Vith...
Marc aka Caran...

I actually see major problems in the Erzgebirge / Thüringen Area. Both the towns of Chemnitz and Suhl are absent from the map. I have a mother from the area so I know a bit about Suhl, it is the only major industrial town in a very inaccesible, mountaineous Thüringer Wald (roughly where is now RegionName205 Saalfeld, very correctly depicted as "mountain")

I dont know if moving/creating towns is planned but I highly suggest it!

RegionName239 Erzgebirge --> Chemnitz and ca size 10 town placed on the map
Chemnitz is a very important industry town. Perhaps someone knows the area better than me, but it is inadmissable to leave it out, as it is sort of the capital of the Erzgebirge region. Also the south (Dresden, Chemnitz) is the only part of East Germany that can be considered industrialized. So unlike most of Prussia this would be of actual strategic importance.

RegionName205 Saalfeld --> Suhl a ca size 6 town and weapon factory "Suhler Waffenfabriken" placed on the map
Suhl is smaller but was actually called the "German Damaskus" because of its importance for weapon industry. The many arms manufactures include the Sauer & Sohn factory, Simson, Waffenfabrik August Menz, Haenel Sportwaffen and Merkel, and Parabellum 08 were manufactured in Suhl. http://en.wikipedia.org/wiki/Suhl

Both Suhl and Chemnitz (Karl-Marx-Stadt) were also major Bezirke in the DDR http://wiki-commons.genealogy.net/images/9/9d/DDR_Bezirke.svg
Files: Alternative music for España 1936

what do you think about that:


As far as I know there were more Frenchspeaking inhabitants in Brussels but haven't found any firm figure. Would you have one?

It looks perfect to me. As for Bruxelles, I think you're right here too, so I would keep it as such.
Nice work !

minipol wrote:It looks perfect to me. As for Bruxelles, I think you're right here too, so I would keep it as such.
Nice work !

Yes for "Bruxelles". For a long time it was a flemish city, but after the independance of Belgium, it became progressively a mostly french speaking city as a capital of a country whose sole national language was french.

Some numbers here (french wiki because it is more complete than the english one) : http://fr.wikipedia.org/wiki/Francisation_de_Bruxelles#L.27.C3.A9volution_.C3.A0_Bruxelles-ville

So for the game's timeframe, we can safely keep Bruxelles without provoking a diplomatic incident

Is there a chance that cities can be added to the map, or existing ones changed?
Or should we better do such changes ourselves?

Someone already pointed out that Zagreb is completely misplaced, and I suggest that omitting Chemnitz and Suhl is a mistake that should be fixed
Files: Alternative music for España 1936

How is Zagreb misplaced?

it was discussed in this thread, and looked convincing