AlessandroD (CSA) vs Paxmustela (USA) - A CSA point of view...

AlessandroD (CSA) vs Paxmustela (USA) - A CSA point of view...

after a very long break I am willing to play a CWII game again, even if I am not an expert I will try to share my thoughts and tactics hoping someone can find them helpful.
Of course I am open to suggestions and any advices would be more than welcome. 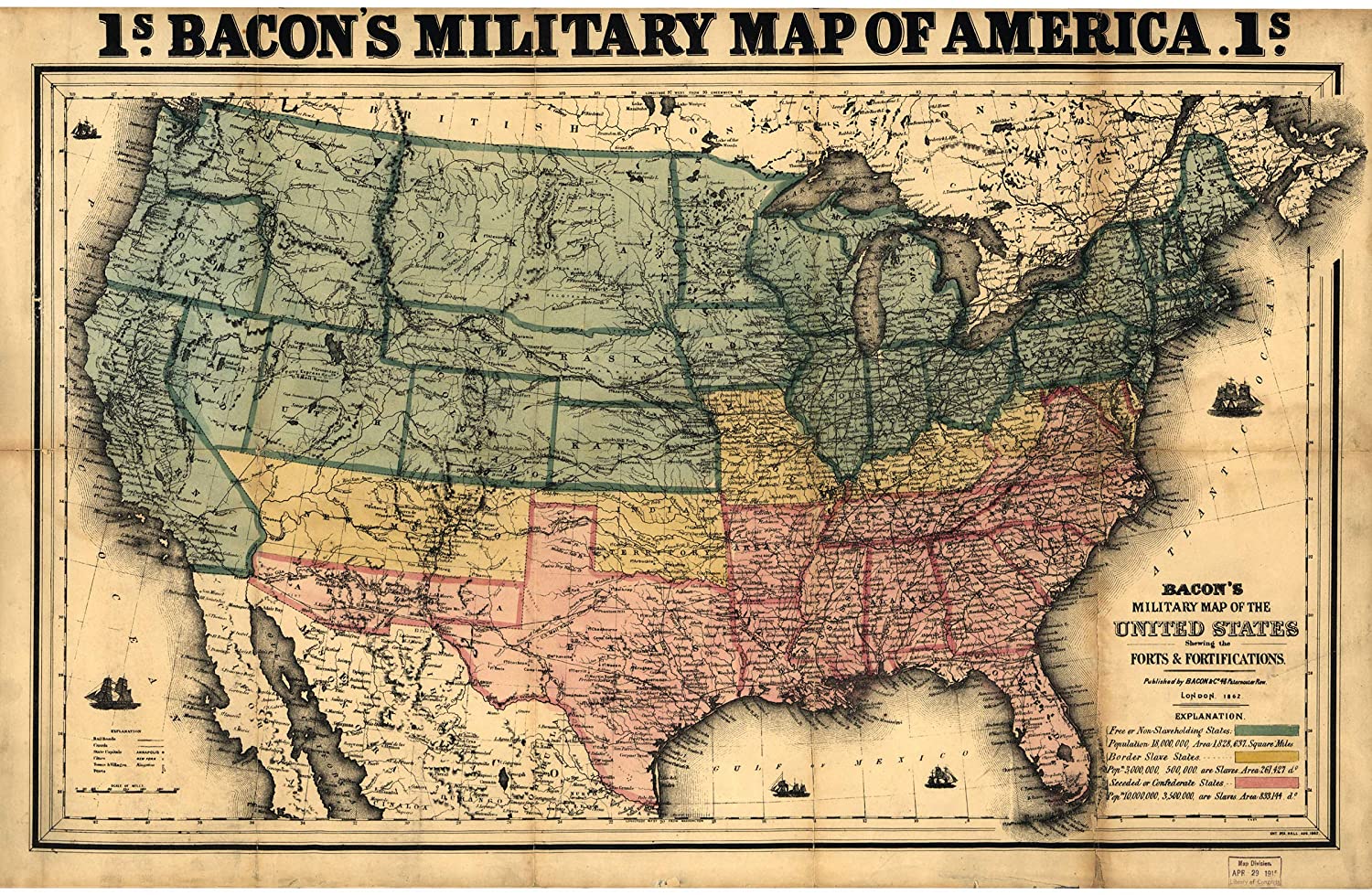 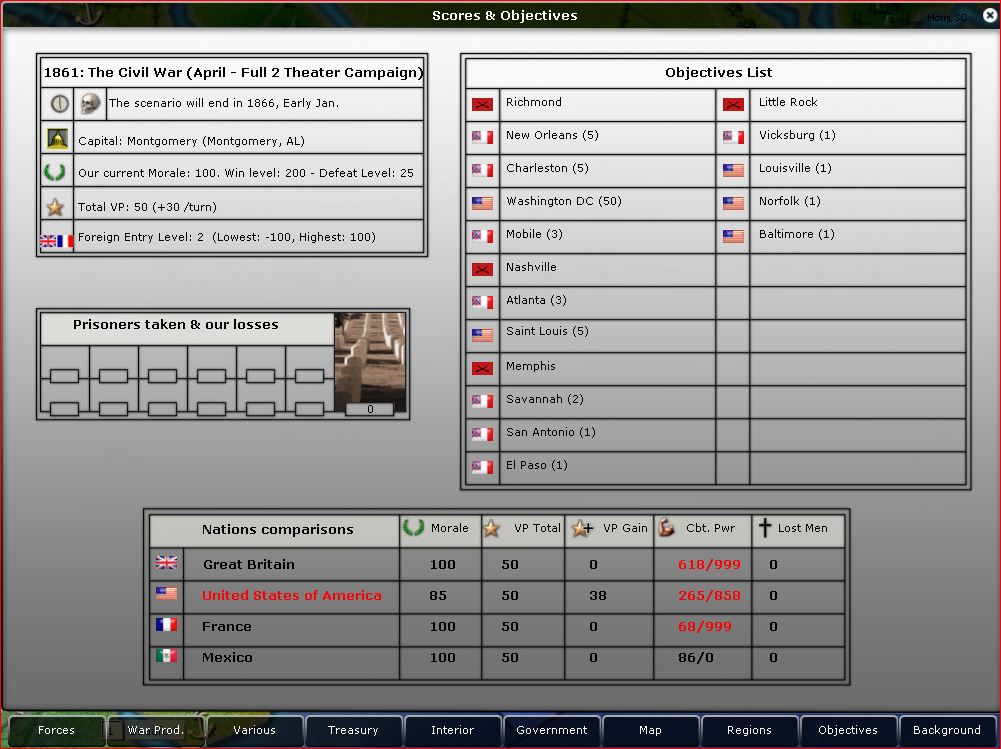 This thread is forbidden for my esteemed opponent

Looking at the map there are ton of places where you want to fight and build up your armies but given that the resources are very few I will select only few areas.

Far West
The goldmines at Sacramento are very tempting but I am not sure if I can take them without a big effort, I prefer to invest lightly here and to take Santa Fe if feasible. Obviously the supply is the big problem.

West
Not sure if I can invade the whole Missouri state as well, Sant Louis is a big objective to take but I already start at disavantage. Anyhow I don't want to give up so easily and Springfield will be my Alamo.

South West
In Texas there are several objective/strategic towns to defend, Louisiana is very important for money and Arkansas for VPs again. Supply network is not so good and need some more depot.
New Orleans and Houston will field future counterinvasion forces, In Arkansas I want to defende at Fayeteville.

South East
In Tennessee I want to build up a force ready to strike when the Kentucky neutrality will end, ideally another force would be very helpful in Mississippi if the enemy want to attack along the river, a lot will depend on how the Union will be aggressive here.

Deep South
Lot of ground to cover against amphibious invasions, Charleston, Savannah and Wilmington need a permanent garrison, moreover another two forces will be helpful to quickly attack enemy landings.

Mid Atlantic
I will try to keep West Virginia in Confederate hands but I need the railroad intact from Harper's Ferry to supply my troops, Morgantown can be taken but I don't know for how many time.
Of course, Virginia is my main concern, lot of resources will be used in this theatre and to take Alexandria will be my priority if not a huge enemy army sits there.

Army Warfare
2th SC lead by P.G.T. Beauregard assaulted Fort Sumter, the rest of the Carolina troops moved to Charleston.
Thanks to bad luck the enemy battery has been captured without losses. 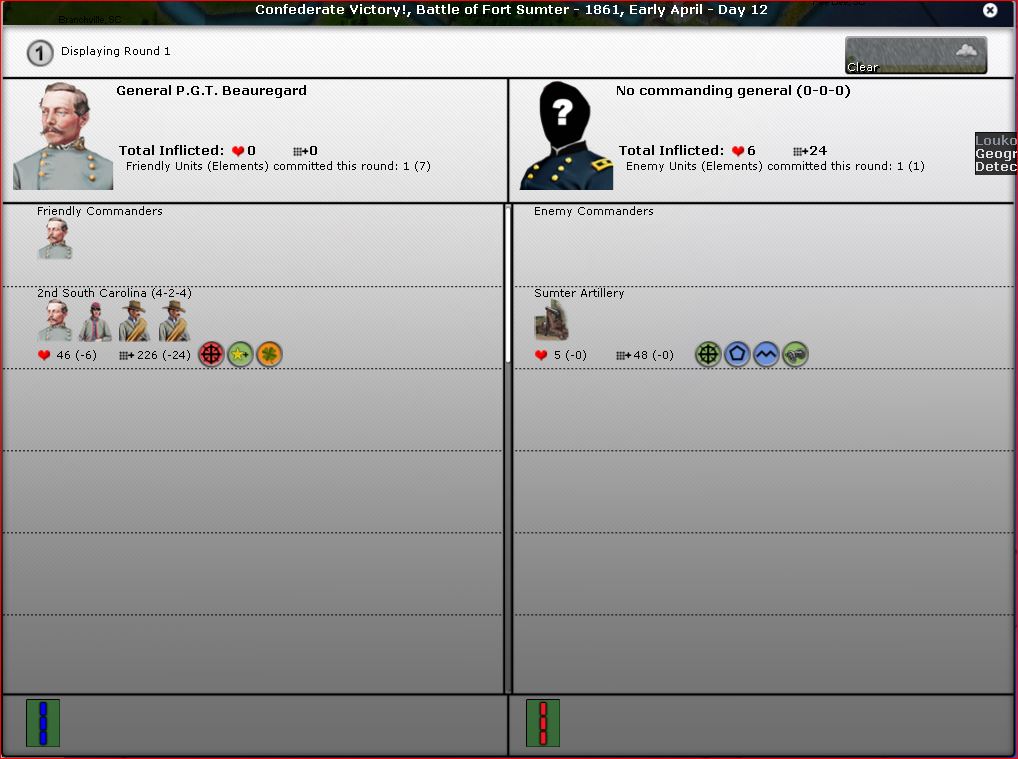 Naval Warfare
6 Brigs will sail in the Blockade Boxes.

RGD
I want to build a road between Springfiled and Fayetteville therefore I need to increase the territory development first.
Clearing: Cass (MO)
Develop Territory: Cass (MO)
Export Cotton bales: Matagorda (TX)
Draft: Vicksburg, MS, given that there are no Money or War Supply here the loyalty loss shouldn't be a problem.
Demonstration: Saint Louis (MO) but failed, Cairo (IL), Sacramento (CA)
Not sure if there are worth the money spent on but I will try to influence some cities in the border states hoping to limit his force pool or to create partisan in California.

Army Warfare
Winchester Militia soon lead by Winder will hold at all cost Harper's Ferry.
Suffolk Militia took Norfolk.
Carolina troops will march towards Virginia as soon as possible, I need boots to hold the ground until main armies will be ready.
Generals Thompson and Evans will be helpful in WV especially the former if I have to retreat through the mountains.
Generals Ruggles and Whiting will reach the West.

Naval Warfare
Runners: 8 WS
LA transports sent to Montgomery to create a depot, I have several holes in my supply network and I will gradually fill them.
Mississippi Squadron sail to Vicksburg. Army Warfare
West Supply to Houston where I will build the Texas garrison.
The excellent Shelby will march to Springfield where several units are under construction, I want to keep a foothold in Missouri, depot destroyed at Rolla.
The previous Inf Bde built in SC will march to New Orleans to defend one of the most important Confederate city.
Suffolk Militia will bolster the Harper's Ferry garrison in the meantime that better units will arrive, the rest of the artillery to Richmond.

Naval Warfare
Runners: 10 WS and 2 Money
I just discovered the Flatboats, if I am right they are good to build depot in ports, therefore I don't want to use the more expensive LA transports for this.
I build one to check.
Virginia Squadron will wait an Admiral with the evade skill to bypass Fort Monroe.
Admiral Buchanan redeployed to Vicksburg. 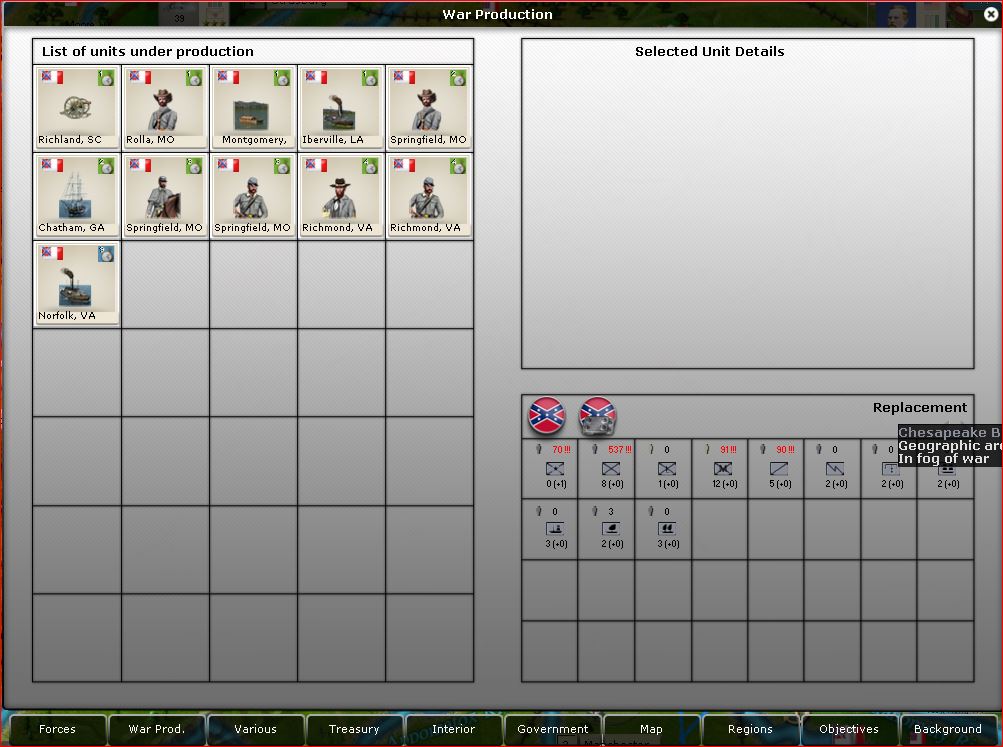 RGD
Export Cotton bales: Matagorda (TX)
Draft: Camden (AR) but failed
Demonstration: Philadelphia (PA), New York (NY), I will try to lover the Union production (again I am not sure if it will be worth) Army Warfare
Saint Louis Massacre event has been triggered, a good amount of units (especially cavalry and artillery) ready to march in Missouri, the militia troops stay at Fayetteville.
We have 3600 infantry, 1200 cavalry and 24 guns at Harper's Ferry, enough to hold until more troops will be available, the militia units are diverted to Williamsburg and Suffolk for entrenching duty.
Magruder with his men and heavy guns in support deployed at Fredericksburg.
Rangers take Fort Stanton.
Fort Sumter garrison arrived, 2nd SC Bde free to redeploy.
Union cavalry captured Parkersburg.

Naval Warfare
Runners: 9 WS and 3 Money
Memphis Squadron with Hollins move to Insland 10 too.
Tattnall with 2 brigs sail in the blockade box. 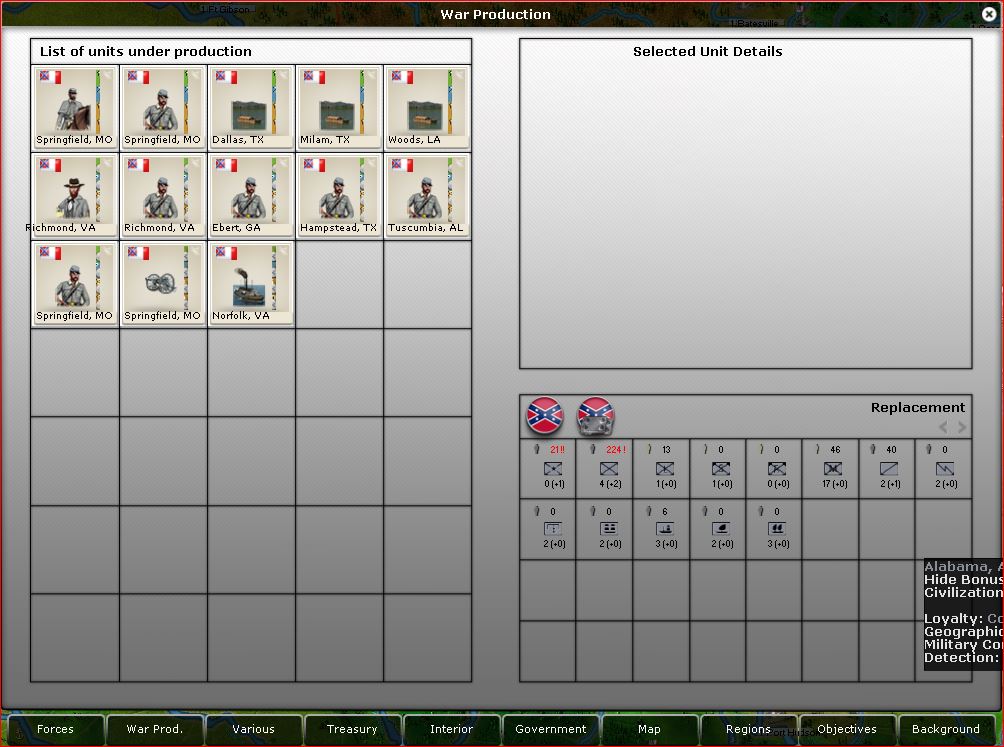 I want to increase the WS using the industry therefore I am building Iron Works in New Orleans and Manchester cities, a huge cost now hoping to have a good revenue in the long run.

RGD
No more Export Cotton bales because 4 or 5 of them went rotten in the harbors, three left and I hope in some lucky gain.
Def. Works at Springfield.

Army Warfare
Rolla militia will move to Jefferson City.
Shelby with two cavalry units in raid at Bloomington.
At Fort Baxter we lost an engagement against enemy cavalry.
Fort Gibson taken.
Depots built in Dallas, Milam and Port Hudson.
First battle in WV at Morgantown, a costly victory, without the regular cavalry would have been a defeat instead.
I will try to avoid to use militia/volunteers in offensive operations. 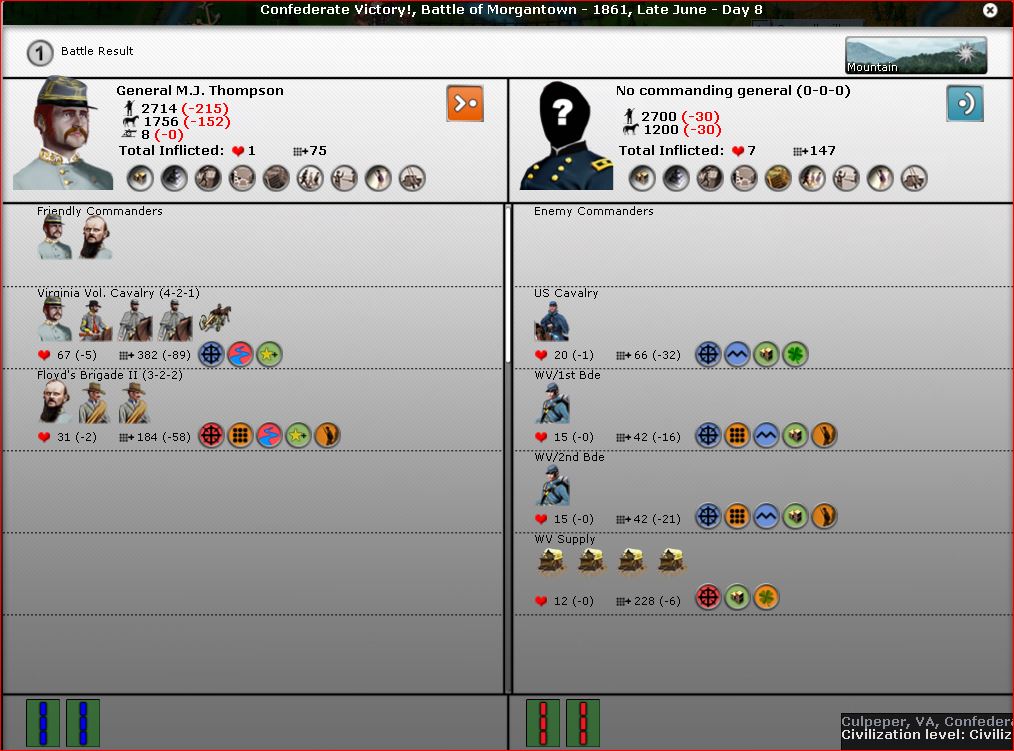 Levisburg taken.
T. H. Holmes will releave Floyd as stack commander.
In Virginia I am trying to keep all stacks without command penalty, I hope less troops but with a better commander will be enough to balance out the Union numbers.
Army of the Shenandoah created under J.E. Johnston will march at Harper's Ferry.

Naval Warfare
Runners: 11 WS and 3 Money
Semmes returns to Charleston for replacements, then will lead the Atlantic Blockade.

RGD
No more Demonstration cards I guess, money is tight and I am not sure about their value, they have been easily opposed (just one is still on going).

General Overview before the turn. 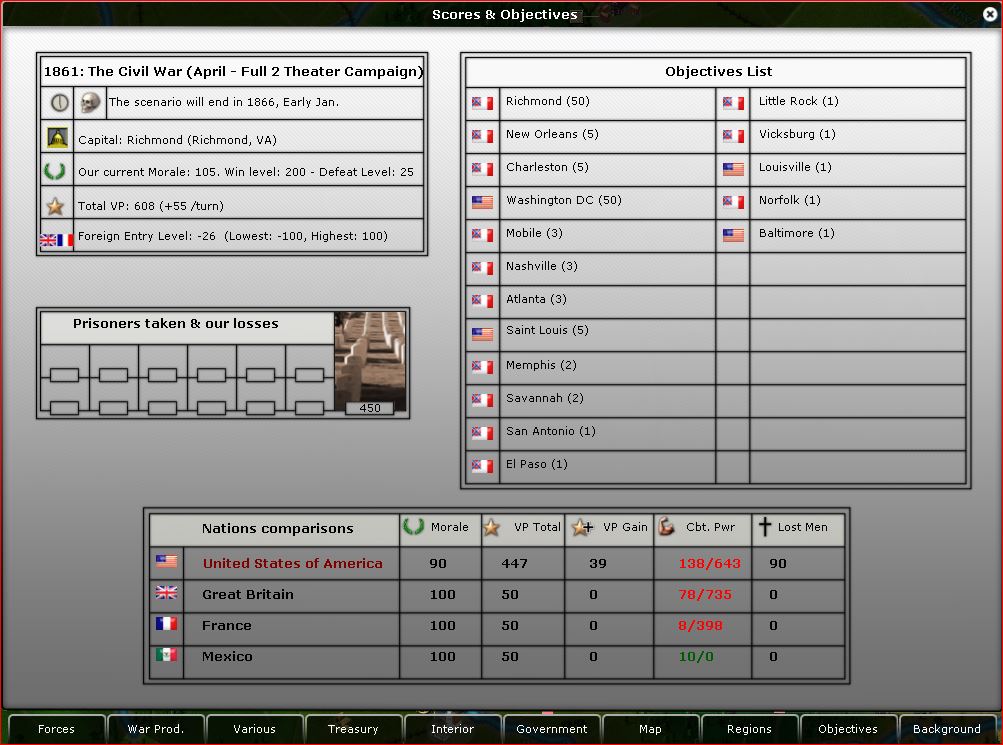 Army Warfare
Rangers captured Fort Summer.
Rolla militia failed to destroy the railroad at Jefferson City.
Shelby moved to Quincy, another farmland, after raized Bloomington (MO).
McCulloch and his force will move in the East Missouri.
Cavalry and infantry forces to change control of the railroad that connect Morgantown and Harper's Ferry.
Jackson crossed the Potomac river to test the Union willing to fight.

Naval Warfare
Runners: 8 WS and 2 Money (I have four units with two Brigs each one)

RGD
Building a Telegraph line in New Orleans, I want to check if reaching 80 civilized points will change the incomes.

Lot of actions and great gain in Morale points by The Confiscation Act and battles won. 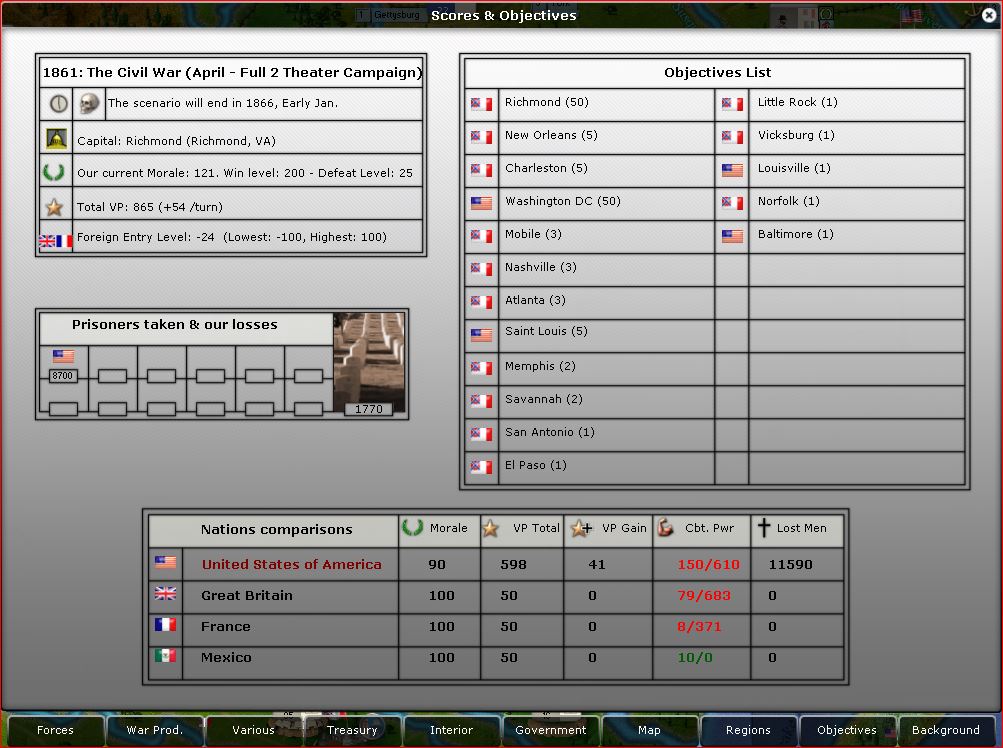 Army Warfare
Time for some picture to give a better understanding of the armies on the map.

In the FW nothing to say, no one is pushing in this theatre. 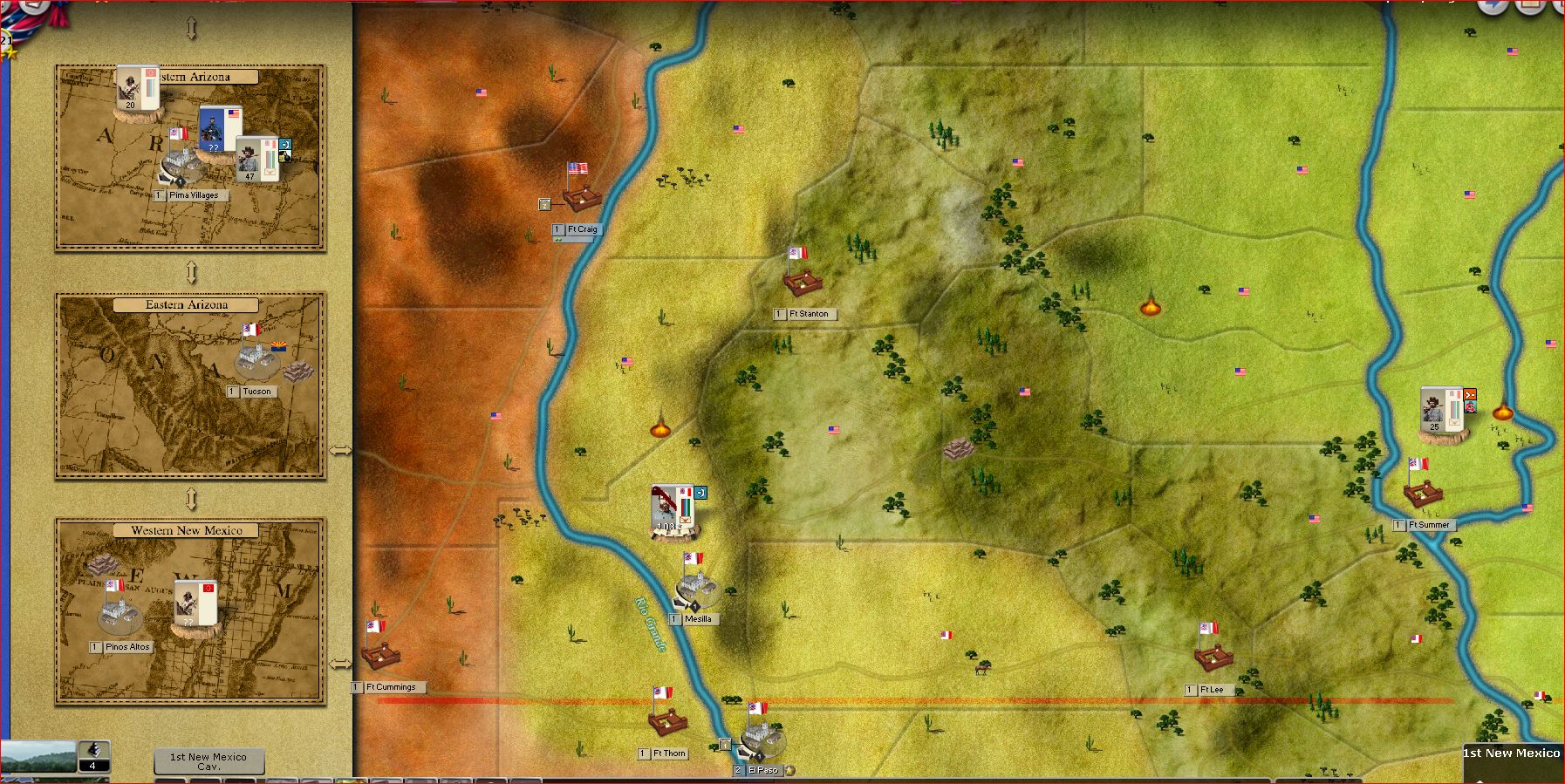 Rolla militia is trying to destroy the railroad at Jefferson City every turn but without success.
Shelby assaulted Quincy but the garrison hold the city even if it lost the battle. 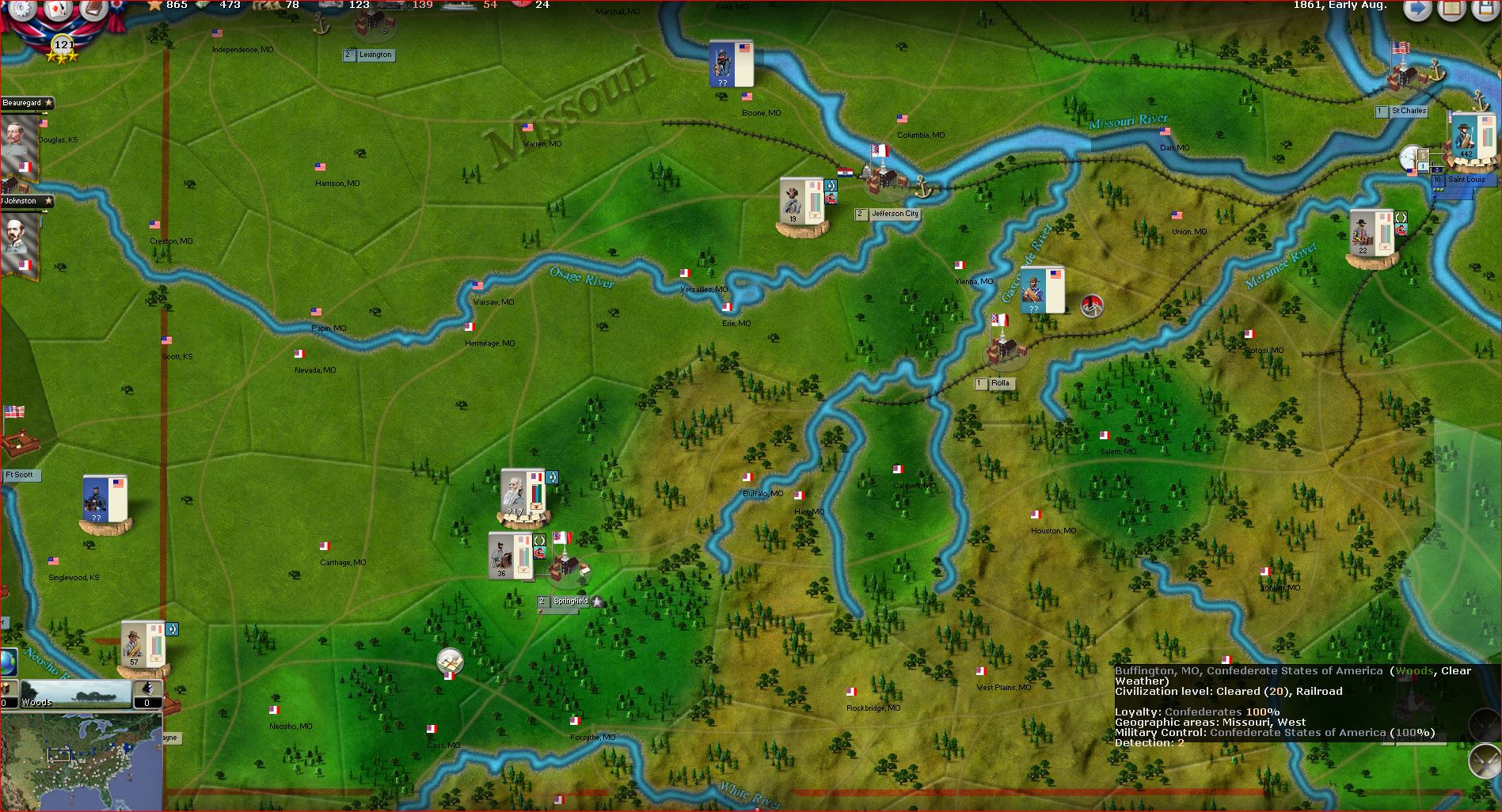 Polk is moving to Humboldt ready to occupy Paducah when the possbility will arise (Kentucky is still neutral).
Same for Zollicofer that moved to Gallatin.

In West Virginia I have enough MC along the railroad that connect Morgantown and Harpers Ferry to keep my units supplied.
My forces here are volunteers and cavalry units, not enough to keep the offensive but I am thinking to move a good general to take Wheeling and to threat Pittsburg.

Jackson successfully defeat a small brigade in Franklin with a clear path to Harrisburg or York.
In Alexandria there are 2000+ CP in entrenched status and a direct assault if out of question but, to my surprise, has been the Union Army to attack me.
Two bloody battles but thanks an oustanding defence by Beauregard's troops and a bad organized attack with lot of concripts in the Union force we captured 8700 men plus 3100 rifles (+6 NM).
Entrenchments and no penalty on command made the day. 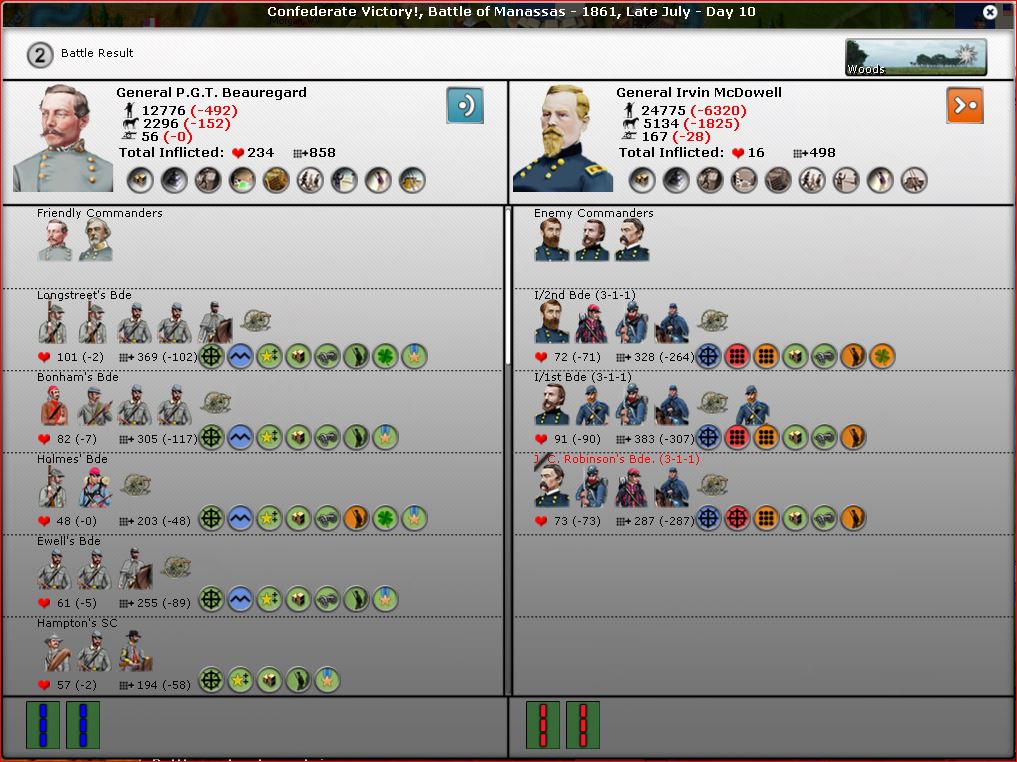 The enemy force is still strong though, is still a 1:2 odds in his favor, Alexandria has 320 CP and around Fredericktown there are another 550 CP (maybe his was trying to catch Jackson). 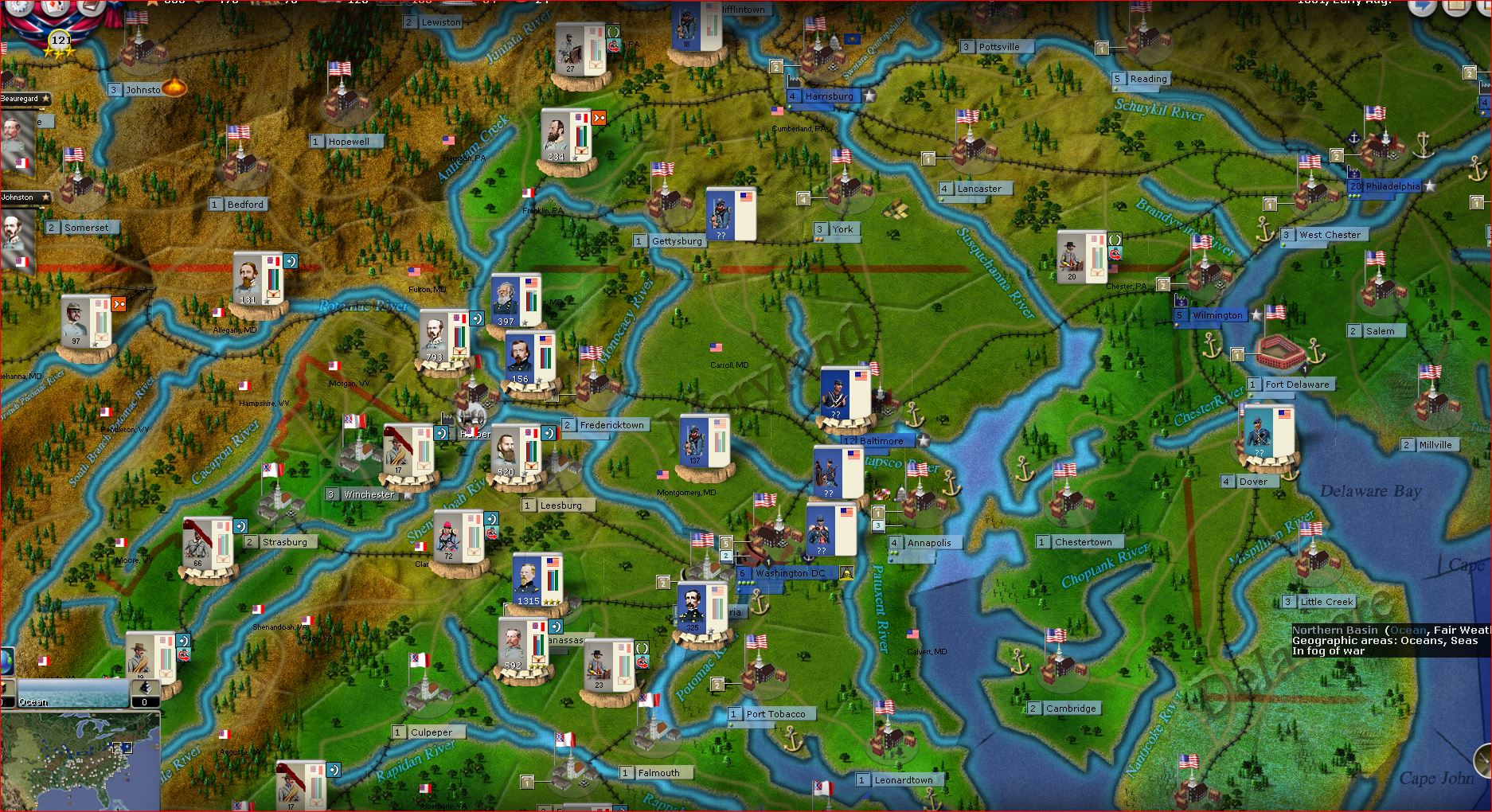 Naval Warfare
Runners: 10 WS and 2 Money
Sent Venus Brigs to get replacements. I don't want to build new Brigs but I want to keep them at full strenght even if I am not sure if the total strenght of a unit does matter for the raiding revenue.

Army Warfare
Rangers in Western Arizona destroyed Pima Villages.
Another Rangers unit captured Fort Bascom.
In general I will use the rangers units to take ungarrisoned forts to burn them in the Kansas and Indian Territory.

McCulloch reached Charleston, in Cairo there are several Union units for 300 CP.
Shelby force got reinforcements, three cav and a horse art units should be enough to handle his cavalry counter raid units.
Jefferson City captured by enemy.

I cannot attack him at Manassas because 1300+ CP are too much for Beauregard and my cohesion is about 2/3 of the total therefore no offensive by me, anyhow the Union Army withdrawn to Alexandria.
In the meantime I can try to hit his back, Longstreet enter Montgomery (small battle won) and Johnston Fredericktown, below the report: Jackson attacked York and the city is under besiege. 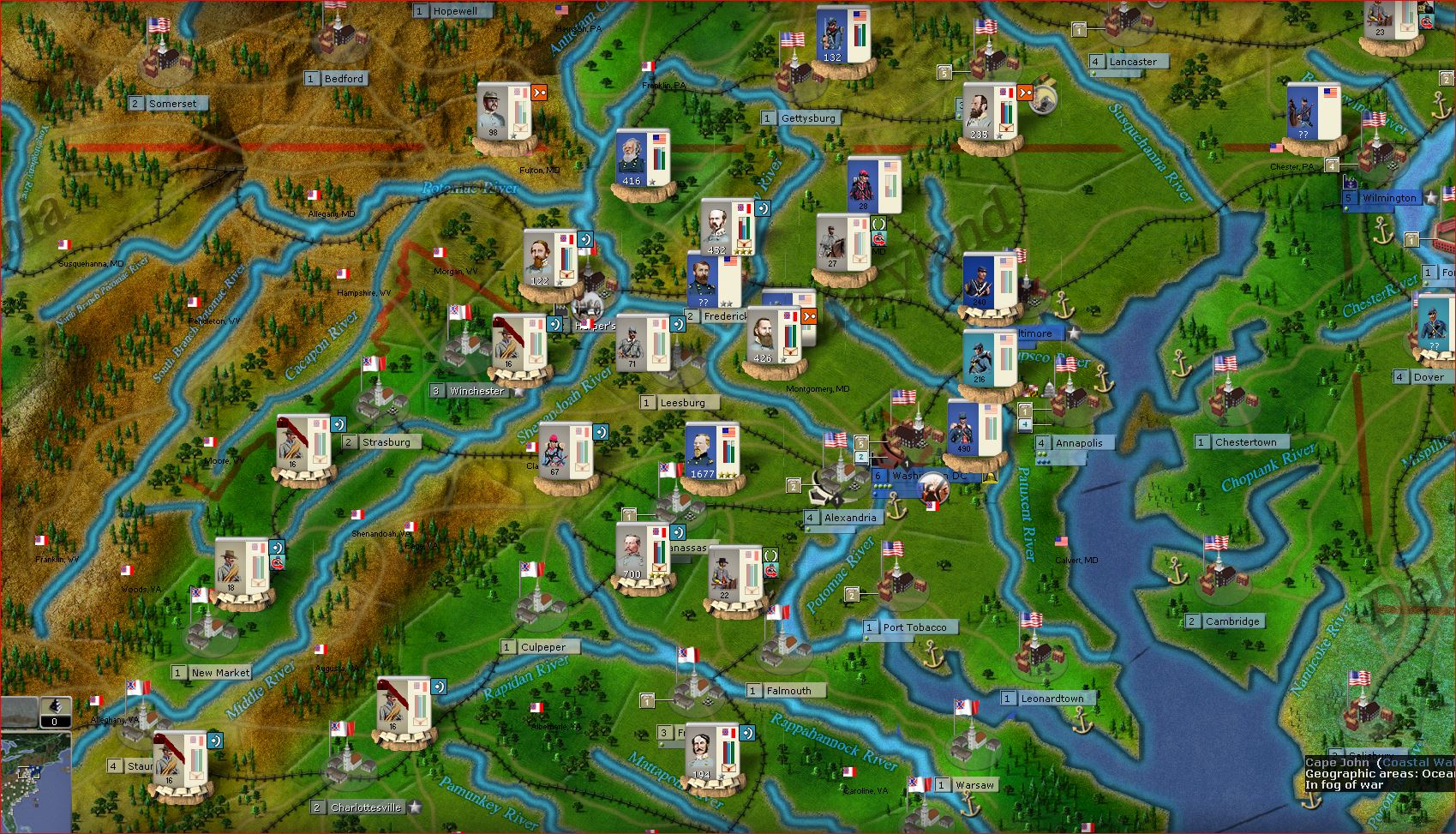